Sea of Thieves Pirate Code and Community Code of Conduct

When in the world of Sea of Thieves, be it searching for lost treasures, waging wars across the decks of rival raiders or simply sharing stories whilst drinking grog with your crew mates, all players should treat one another with respect. 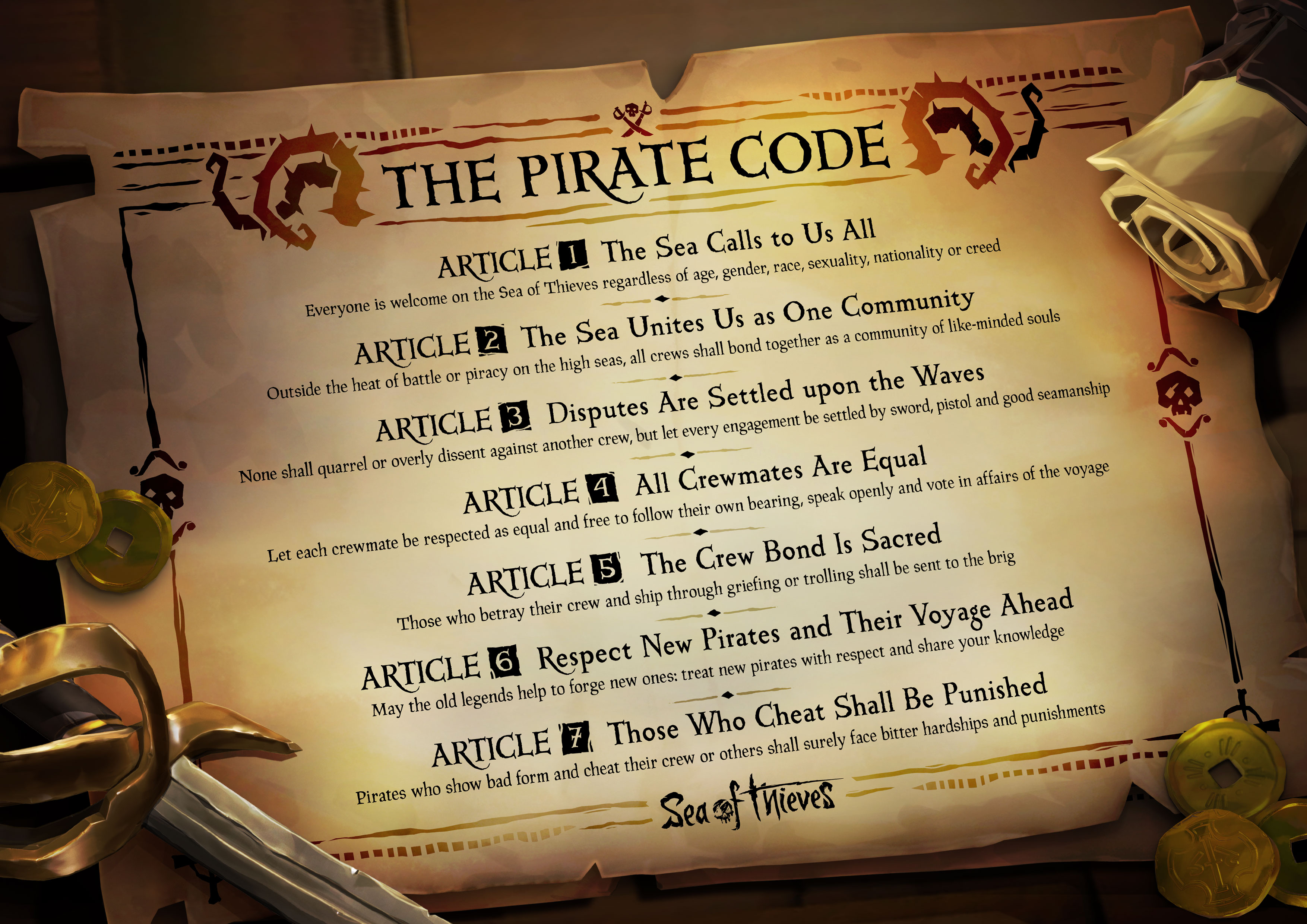 It is from this belief that the community-led Pirate Code was created, which in turn is the foundation for the Sea of Thieves community code of conduct that is detailed below :

Community is a central focus for us on Sea of Thieves. Its core concept has always been players creating stories together, and since the game’s unveiling at E3 2015 we’ve loved seeing the community grow with us. We’re proud that Sea of Thieves has brought together millions of players from across the world and all walks of life.

Building the game with our community and hearing their feedback has been important to us since our very first test. Our positive community is a testament to our players and the way they’ve embraced our vision for a welcoming and inclusive multiplayer game. If you haven’t already, check out the Pirate Code that we created with the community back in 2017.

As the game has grown, so has our community and the places we interact with them. In line with the Xbox Community Standards, we wanted to put together a Code of Conduct that covers our expectations for community behaviour – not just in-game, but across all our official channels and community spaces. Whether you’re a seasoned pirate or someone dipping their toes into Sea of Thieves for the first time, here’s how we expect our players to behave.

Be respectful. Sea of Thieves is a game for everyone regardless of age, gender, race, sexuality, nationality, creed or disability. Treat everyone with respect. Diversity only enriches this larger-than-life pirate community of ours and makes Sea of Thieves’ world a far more interesting one to explore. When we all play, everyone wins.

Be welcoming to new players. We were all new pirates once, so pay it back by welcoming first-time players or those still learning the ropes. It’ll set them an example of how to behave and make them want to return, weaving their own stories into the lore of Sea of Thieves. You may even make some steadfast new crewmates.

Be a good sport. Sea of Thieves is a pirate game, and stealth, stealing and battles are all part of the fun. All pirates on the seas accept that, but be a good sportsman in both victory and loss.

Be courteous. Don’t insult players you don’t know. If humour is the intent, remember that this can be lost or misinterpreted online, and words can very easily offend. Be mindful of what you’re saying and if someone asks a question, see if you can help them out as you’d appreciate being helped out yourself if the roles were reversed.

Keep it appropriate. Avoid swearing in unfamiliar company where possible. Don’t post anything containing NSFW material – this has no place in Sea of Thieves or its community spaces. And while we all have opinions of the world around us, people aren’t necessarily playing Sea of Thieves to talk about politics or contentious real-world issues. Switch off, escape and enjoy the freedom of the seas instead.

Remember kids are playing. Sea of Thieves is home to players of all ages, so keep your posts and conversations appropriate for younger players and families.

Sea of Thieves is a game. Games are meant to be fun. If you become angry or frustrated, take a break. Don’t be rash and act out your anger in a way that could ruin the experience for others and lead to a report being filed against you.

Sea of Thieves is a fantasy. It is not a historical depiction of piracy from any real-world place or time period. We will not abide arguments in favour of such things as slavery. If that’s the game you want, you’re in the wrong place.

The things you post are public. Don’t disclose real-life personal information that could result in fraud, hacking or impersonation. Be mindful about what you share in any online space.

Discriminate against anyone based on who they are. As stated previously, Sea of Thieves is a game for everyone regardless of age, gender, race, sexuality, nationality, creed or disability. Prejudice of any kind is totally unacceptable.

Harass, bully, intimidate, threaten or encourage others to do harm. None of these behaviours will be tolerated. Any activity you engage in that is solely designed to target and upset another player or crew constitutes bullying. Repeated activity designed to ruin the experience of another player or crew constitutes harassment. Not only do we take these things very seriously, many law enforcement agencies recognise online abuse as an offence. If necessary, we will report incidents to the relevant authorities to take further action.

Share anything illegal. If it’s illegal in real life, it has no place in our community. Discussing or distributing banned content, copyrighted material or anything related to drugs or black market goods will not be tolerated in our spaces.

Cheat or hack. We have a zero tolerance approach to any form of in-game hacking or cheating, and transgression can result in a permanent ban. Data-mined content is also prohibited from our channels as it can ruin future game updates for players who have no wish to be exposed to incomplete or out-of-context information. Activities such as teaming or boosting to gain an advantage over other players in competitive game modes may also result in enforcement action.

Advertise, spam, troll or engage in witch hunts. There are areas in our official Forums and on our verified Discord server where you can advertise your own community groups – just ask if you don’t know where to find them. Other kinds of advertising are not appropriate. Any form of spamming should be avoided. Trolling, baiting and witch hunts are also unacceptable. If you have evidence that you think our Customer Support team should see to help them take action against a player, send it to them using the process outlined at the end of this article.

Stream snipe. Streamers of all sizes have played a major part in Sea of Thieves’ story so far, and we love seeing all our players share their stories with others. The act of stream sniping can ruin the experience not only for the streamers who are playing but for all their viewers. Repeated stream sniping is deemed to be harassment and punishable as appropriate.

We take our Community Code of Conduct seriously. We will take action on accounts that we determine to have breached our Code of Conduct or the Microsoft T&Cs. Account actions can range from warnings and suspensions to permanent account termination from our game and services at our discretion, where doing so would be in the best interests of Rare or our customers.

If you believe that someone has broken our Code of Conduct or the Microsoft T&Cs, please read the article at the link below and create a support ticket. This will be reviewed and the appropriate action taken by our support team.

Sea of Thieves: How To Report a Player (Game)

If you believe someone has broken our Code of Conduct or Microsoft T&Cs on the Forums specifically, please read the topic below and flag the offending post for moderation. This will be reviewed and the appropriate action taken by our community team.

Sea of Thieves: How To Flag a Post for Moderation (Forums)

In most cases, we operate a three-strike policy with regard to enforcement action. Players who repeatedly breach the rules of our Code of Conduct will be permanently removed from Sea of Thieves on their third offence. However, serious offences may result in immediate account termination at our discretion.

Furthermore, should a player attempt to circumvent enforcement action by use of alternate accounts, all accounts associated with that player will be terminated with immediate effect.

While we respect people expressing themselves, these listed rules may also apply to your status, nickname, usernames, bio, 'About Me' and profile banner on any of our social spaces as these areas are also moderated.

Don't forget that whilst using the Sea of Thieves Forums, you're also subject to the following policies.

Raise a support request with one of our team.

©Microsoft 2022. Microsoft, Rare, the Rare logo, Sea of Thieves are trademarks of the Microsoft group of companies.
©Disney. All trademarks and copyrights are property of their respective owners.